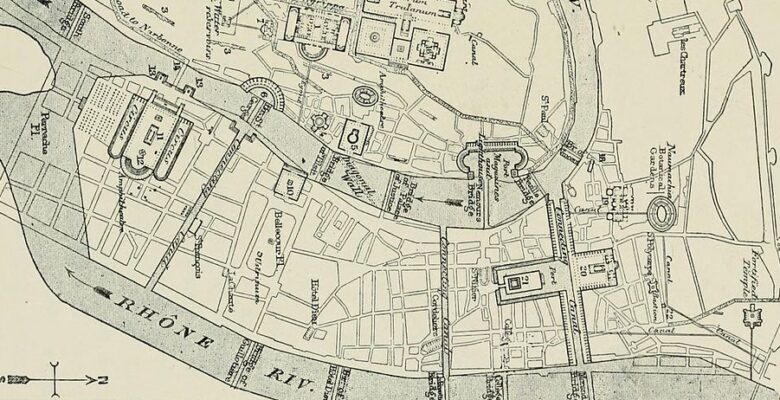 When dealing with Latin epigraphic poetry, it is a matter of time before one encounters a text that, however easy to understand and to translate it may be, includes some thought, expression, or cultural reference that is lost on us, the readers of the future.

Which pieces would be the most prestigious members of the carmina obscura Hall of Fame?

Surely, the answer to that question is very personal. This instalment of the Epigram of the Month series is dedicated to one of those cases, however.

Everything (or almost everything) about the inscription in question is quite straightforward – at first sight. The monument, originating from Roman Lugdunum (Lyon) and dating between the end of the 2nd century and the beginning of the 3rd century AD, was a limestone altar (lost according to some, preserved at the Lugdunum Musée according to others) and had a bas-relief on the upper part, above the text, where two dogs (Merula and Educata) were portrayed.

Merula and Educata. To the Spirits of the Departed and to the eternal memory of Sutia Anthis, who lived 25 years, 9 months and 15 days; who, while she was exceedingly pious, became impious, and to Attius Probatiolus. Cerialius Callistio, husband and father, had this (monument) made also for himself while he was alive and dedicated it under the axe. (Transl. VGB)

Perhaps the first thing about this text that catches our attention is the imbalance between what we know of Sutia Anthis (a relatively common cognomen among slaves and freedwomen in Rome) and what we know of Attius. Whereas we are given her exact age (in years, months and days) and a small piece of personal information (more on that shortly), we don’t even know who Attius Probatiolus is until Cerialus Callistio (likely also a freedman?) calls himself coniux et pater. What could be the reason? Since he had a name, it is not likely that he was a baby. Interestingly enough, it is not the same as his father’s: maybe Cerialius was not the biological father? In any case, it is striking that not even the age is included. However, the reason behind this could be that a separate monument had already been dedicated to him. Thus, in this one a brief mention could have been enough.

And now for the main mystery: the text itself is almost completely written in prose. However, hidden in there, not marked at all by the text’s layout, the so-called ordinatio, we come across a short sequence referring to Sutia and put in the rhythm of a iambic senarius: dum nimia pia fuit facta est inpia, ‘while being / even though she was exceedingly pious, she became impious’. What is the purpose of this message? Is it a compliment or a critique in disguise?

As is often the case with somewhat difficult passages, the interest on this bit has periodically rekindled, but there does not seem to be an interpretation that satisfies everyone. Certainly, in this case it doesn’t help that pius is an adjective whose meaning can vary greatly depending on the context in which it is used .

This multiplicity of senses is reflected on the different interpretations this text has received since the 18th century. Given its late dating, some argued that the widower was reproaching Sutia for having converted to Christianism (even though the text opens with an invocation to the Manes, the spirits of the deceased). This approach was challenged since early. Although it was included among the Inscriptions chrétiennes de la Gaule antérieures au VIIIe siècle (vol. I, 1856, no. 86A), E. Le Blant used its entry precisely to explain why he thought this inscription was pagan. On the one hand, he argued, in epigraphic texts pius generally takes up the sense of ‘devoted’, but not necessarily connected with religion. On the other, it would not have made sense to dedicate a very ornate altar indirectly but openly stating that the deceased was Christian at a time when persecutions were still ongoing.

A few different interpretations followed this one, all appraised by J. Doignon (‘L’impiété de la Lyonnaise Sutia Anthis d’après son épitaphe’, in Hommages à L. Herrmann, Collection Latomus, XLIV 1960, pp. 301-314). It was suggested that Sutia could have had an affair or a first husband and ultimately died for the other person. Then the story evolved to include the son: since he carried a different nomen, maybe he had been conceived from a previous relationship. He must have died first, which was unbearable for the mother, who subsequently died as well. Doignon softened these scenarios and proposed that maybe impia was not really an accusation: according to him, there is no reason to believe that Cerialius was not Attius’ father. He could have been heartbroken by the loss and therefore accused her of impia for having preferred following their son to the life they shared together. As for the pia–impia antithesis, it could have been just a poetic resource inspired by lyric poetry to elevate the tone of the text, along with the alliteration or the chiasmus.

Shortly after Doignon’s publication, G. Stégen (‘L’« impiété » de Sutia Anthis’, in Revue belge de philologie et d’histoire, 39, 1, 1961, pp. 59-61) argued that the easiest solution would be to understand the sequence as a not-too-well executed hyperbole. Given that it was very standard to call one’s spouse pia or pius, Cerialius’ wish was to go above and beyond that: Sutia was so very very pious that she went beyond it, which in the text was expressed by means of the opposite of this notion.

To end with the interpretations, P. Veyne (‘Martial, Virgile et quelques épitaphes’, in Revue des Études Anciennes, 66, 1-2, 1964, pp. 48-52) partly comes back to the beginning and, by comparing many instances of the topic of the inversion of the natural course of life, he argued that out of piety she didn’t want to see the passing of her loved ones, and therefore died first, which made her impious.

Personally, I see some great points across (almost) all the interpretations. As Veyne proposed, it’s likely that she was called impia because, although being younger, she had died first. The epigraphic sources vastly support this. However, there is no reason to connect her pietas with her not wanting to see her close ones die: maybe she was just an overall wonderful wife (or so Cerialius thought). Thus, each term –pia and impia– refers to a different context: she led a life of piousness and devotion towards her husband. Sadly, while doing so, she passed away, which, since she was younger, was judged as unexpected and unfair by Cerialius. Whether her passing was connected to her son’s, her lover’s, her first husband’s, we will never know. Maybe, just maybe, there is no need to explain it through any of the men in her life.

And so here we are: which one is it? Is it any of them at all?

And more importantly: shall we accept today’s inductee into the Hall of Fame?

(With many thanks to C. Cenati and D. Murzea for much appreciated ideas and feedback).

Previous ArticleEpigram of the month: I have often visited the city of Baiae

This site uses Akismet to reduce spam. Learn how your comment data is processed.